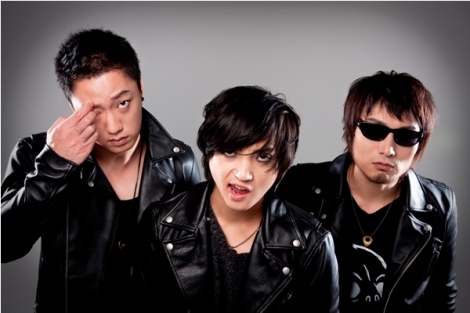 Galaxy Express was formed back in 2006, and since then has been leaving a blazing trail wherever they go, from their home ground South Korea to all across Europe and North America, with their explosive performances. And for listeners while at home or wherever they’re rolling, they offer a burning experience with their punk/psychedelic/garage records: just to name the full albums, there is their ambitious double-album debut Noise on Fire (2008), followed by the sophomore album recorded in just 30 days, Wild Days (2011), and then their self-titled third long player (2012). After opening for legendary Californian garage rock band Thee Oh Sees in South Korea, and making appearance in England, Wales, and Russia, as well as touring the U.S., the band was back in studio to record their fourth full-length album, Walking on Empty (2015). This time, they had Adrian Hall (who’s worked with, among others, Black Eyed Peas, Depeche Mode, Ray Davies) recording and mixing the album, with Miles Showell (Underworld, Eric Clapton, Pete Townshend) mastering it at the famous Abbey Road Studio in London.

The band, who opened for Linkin Park in South Korea back in 2011, consists of Jonghyun Park (guitars/vocals), Juhyun Lee (bass/vocals), and Heekwon Kim (drums). And if you’re wondering, no, they didn’t take their name from the anime Galaxy Express 999 – Juhyun wanted to use the word galaxy that suggests something very big and wide in their band’s name, and they tried many different combinations of words with ‘galaxy’ before hitting one that felt very right to them. 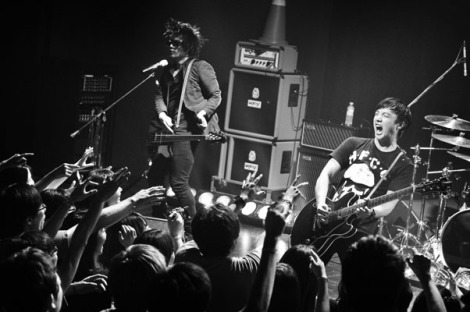 Our interview with the band revealed some very interesting things… including Juhyun’s love of vodka!

What was it like to work with Adrian Hall and Miles Showell?

Jonghyun: It was great to have those guys be a part of our album.  They are both very talented engineers and are true professionals.  We learned a lot while making our new album, Walking on Empty, with all of the amazing people we worked with.

Juhyun: They were really nice, friendly, and cool.  It was an honor to work with them and we’re really happy with how our album came out.

This might sound like asking you to choose a favourite child, but of the songs on the new album, which one(s) did you have the most fun recording?

Heekwon: I had a lot of fun working on all of them so it’s too hard to choose a favourite.

Juhyun: I had a lot of fun recording the song “Booster” and I think all our playing on that track is awesome.

You were involved in the anti-streaming movement in Korea—a stance shared by many musicians around the world that do not think they’re treated fairly by streaming services. It’s one of the things musicians have to face in this Internet era. With more and more people joining the digital lifestyle, how do you see the Internet as a medium for musicians?

Heekwon: The Internet offers many advantages to musicians and helps people find and listen to lots of different music more easily.  But I agree that there certainly is a bad side to streaming services in that musicians are often not paid fairly for their work.  But I don’t want to talk too much about this because the issue is really complex and stressful.

You’ve toured the US extensively and also other countries as well. Care to share some of your most unforgettable experiences while touring overseas?

Heekwon: We toured around the US in a motor home and saw lots of amazing scenery.  Seeing the Grand Canyon during our 2013 tour was an amazing experience.

Jonghyun: We had a show in Las Vegas on our 2013 US tour and one of our fans lent us a hotel room to use while we were there for free.  It was an amazing gesture and we were so surprised and thankful for it!  During that tour, we met lots and lots of really kind people.  We’re really grateful for all of their generosity.

Juhyun: I drank too much vodka the day before our show at the V-Rox festival in Vladivostok, Russia and I couldn’t stand straight during our rehearsal.  Actually because of the vodka I only remember part of that experience!  So maybe I should have chosen something else that was truly unforgettable.  Oh well!  V-Rox was a lot of fun because of the festival … and the vodka!

What’s the best drink you’ve ever had while on tour?

Heekwon: I like soju the best. But all kind of alcohol is delicious.

Your love of bands like MC5, The Ramones, etc has often been mentioned. What about the current music scene? What recent bands do each of you listen to?

Heekwon: Queens of the Stone Age, Mutemath, Royal Blood, and lots of others.

Jonghyun: I’ve been listening to Blur’s “The Magic Whip” a lot.  It’s an amazing album.

Juhyun: I listen to the Korean band Goonam.  And I like the Canadian band You Know I Know.  We’ve played together with them several times.  They’re really good guys.

If you were asked to design a special event for your fans — and money was no issue — what kind of event would you make?

Heekwon: I’d like to throw money into the crowd after the show and then I’d like to buy drinks for everyone and we could all hang out and drink together.

Jonghyun: I’d like to get everyone bikes and ride together with our fans between different cities.  We could play a show in a city, and then the audience members could all hop on their bikes and ride with us to the next city and we could play a concert there too for them to enjoy.  Maybe we could even all sing together while we were riding our bikes.

Juhyun: I’d make a beach party.  We could have a big bonfire, play music, and drink and dance together all night long.

OK, time to play what-ifs! What if one day both Noel Gallagher and Liam Gallagher asked you to support their bands on the same day but at different events? Who would you prefer to perform with more – Noel or Liam?

Jonghyun: Whichever one of them will buy me a better bike!

Juhyun: I’d go with Liam.  Personally, I like his voice a lot better than Noel’s.

Thank you for the interview! Any last words to your fans and fun-seekers in general out there?

Jonghyun: I hope all of you are healthy and happy.  Please come see us live and listen to our new “Walking on Empty” album too!  We wish you lots of good luck in the New Year!