As promised, four artists – Aqours, JUNNA & Minori Suzuki from Walküre, THE IDOLM@STER CINDERELLA GIRLS, and Wake Up, Girls！, delivered their long-awaited performance in Anisong World Matsuri at Anime Expo 2017 ~Japan Kawaii Live!~ on June 30, 2017, at the Microsoft Theater in Los Angeles. Anime Expo itself is the largest anime convention in North America, while the concert is produced by Japan’s leading entertainment companies with the goal of delivering Japan’s anisong concerts worldwide in the highest quality.

Before the show, fans were given the chance to shop for official merchandise, such as T-shirts, and CDs outside of the venue. The 7,000 fans then had their hearts captivated by the full performance of popular anisongs that last for two and a half hours by the girls. 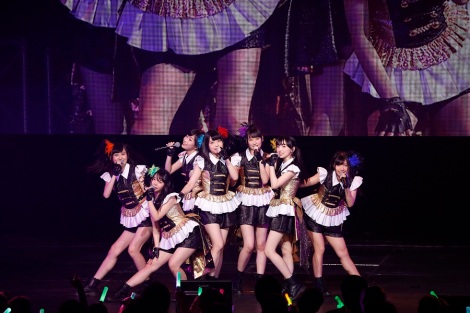 Next came the seven members of Wake Up, Girls！. The full lineup performed their cutest hits such as Tachiagare! and Beyond the Bottom. Their breathtaking comical dance performance fascinated the audience.

In the third slot,  JUNNA & Minori Suzuki from Walküre. As they sang songs from the TV anime Macross Delta, where their unit began, the venue was covered in the glow of penlights. Being the first members representing the group to perform outside of Japan, the two girls did their best to greet the excited fans in English.

The last group to take the stage was Aqours. When the nine members gathered on stage, the audience went crazy with loud cheers and screams. While they performed Aozora Jumping Heart, the huge screen on stage played the music video with all anime characters dancing the same moves along with the nine members as the crowd’s excitement reached maximum level. During the MC, Rikako Aida and Nanaka Suwa, who have studied abroad in the past, translated the members’ Japanese into English. Their performance ended with Yume Kataru Yori Yume Utaou.

Right after Aqours left the stage, fans began shouting for encore, with loud chants from the theater full of fans. All the performers reappeared on stage to thank the fans and bring the first sold-out show of Anisong World Matsuri at Microsoft Theater to a successful end.

The Anisong World Matsuri tour will continue in Shanghai, China, at the already sold-out Mercedes-Benz Arena. The final performance this summer will take place at Otakon 2017 with FLOW, T.M. Revolution, Yousei Teikoku, and JAM Project bracing the line-up. See information below! 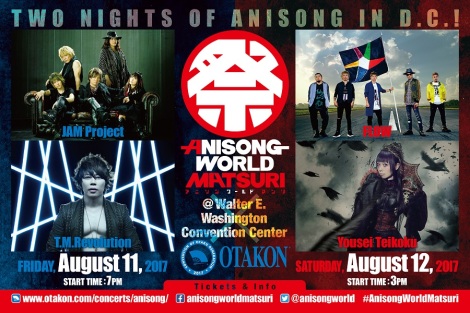