Described by Alternative Press magazine as “the pop punk face of the Korean music scene”, Whatever That Means has gained recognition in melodic punk scene not only in Korea but also in other Asian countries and the USA. The band was formed in 2009 and finally released their demo in 2010 called Piracy Encouraged. Since then, Jeff Moses (guitar/vocals), Trash Yang Moses (bass/vocals), Bialy Mlody (guitar/vocals) and Mizno Cockroach (drums) have been constantly making music and have toured throughout Korea and Malaysia. After releasing their latest single Asian Prodigy last year, Whatever That Means will be back to South East Asia this January, bringing their energetic punk sound. RekON talked to Jeff and Trash to know more about their music and live performance.

What is actually the meaning behind your name? The name Whatever That Means seems to leave an open interpretation.

Jeff: While Trash and I were preparing our wedding, we decided to have a punk rock show at our favorite local club as our wedding reception. We booked so many great local bands, and Trash was playing in a band called BBLT at the time so she was going to play with them. I had been in Korea for almost 2 years but didn’t have a band yet. I decided to just throw something together as a one-off project band. We had to finish the flyer before I knew who I was going to play with so the flyer listed all the bands, and then at the bottom said, “and Jeff…whatever that means.” Once we had the lineup set for that show, we just decided to say our name was …Whatever That Means so we could pretend we were on the flyer too. None of us actually liked the name, but it was only supposed to be for one show. Now, we’re stuck with it forever. Haha.

Please tell us about your music. What is so unique about WTM’s music?

Trash: WTM is a melodic punk band. Our music is different from song to song. Some songs are kind of poppy and others are loud and aggressive. But we make sure everything has a lot of energy and great melodies and harmonies. Jeff grew up in the U.S. during the punk explosion of the min-1990s so the bands of that era are a huge influence on his songwriting. Bands like Bad Religion, The Descendents/ALL, Face to Face, and Social Distortion are huge influences. In recent years, we’ve really been into some of the new pop punk bands coming out of the Midwest like The Copyrights, Banner Pilot, and Dear Landlord and I think you can hear a little of that in our new album.

What or who inspires you in writing songs?

Jeff: It’s kind of rare that I’ll sit down and say, “I’m going to write a song about THIS.” Usually, it’s just a single lyric or a single line of melody that randomly pops into my head, and then I just build up from there. There are definitely some exceptions to that like “The Goodbye Note,” “Sixty-Eight, Twenty-Two,” and “What You’re Wearing,” but usually it’s really just a random thought that pops in my head.

The band members are from different cultures. Does it in a way influence your creative process as a band?

Jeff: We always get asked this question, and the short answer is no. We may be from different national cultures, but we’ve all grown up in punk, hardcore, and metal scenes. Honestly, being a 33 year old punk rocker around “normal people” in my home country feels stranger than being around punks from Korea. For us, band practice is band practice. It doesn’t feel any different than when I lived in the US.

Where and when is your most memorable gig? Why?

Jeff: We’ve played a lot of great shows over the years, but the most memorable has to be playing at 924 Gilman Street in Berkeley, California. I’ve wanted to just SEE a show there since I was 15. It’s the club where Operation Ivy, Green Day, and Rancid all got their starts. It had a huge impact on the US punk scene of the 90s so playing on the stage where so many of my favorite musicians had played really was amazing. We also got to play with a band called The Manix that night. Their frontman was the guitarist of Banner Pilot, one of our favorite bands, and I couldn’t believe that he was opening for us.

If you could collaborate with another musician, alive or dead, who would it be?

Jeff: For me, that’s easy. It’d have to be Kurt Cobain. When Nirvana first hit it big, I was in middle school, and at that perfect age where I was young and angry but pretty directionless. I heard Nirvana and just latched onto it. It ended up being my gateway into punk rock. I remember how utterly destroyed I felt when I heard Kurt was dead. It’d be amazing to somehow have a chance to meet and work with him.

What do you think about Korean indie scene at the moment? Do you guys see any significant progress?

Trash: I’ve been a part of the Korean punk scene for over 15 years. Things always come in waves here. A lot of people say that right now things are getting worse. But I don’t agree. We might not have the biggest crowds we’ve ever had at shows, but there are always new people coming out to check things out. And in the last few years there have been a lot of great new bands starting out. Besides that, it’s getting easier and easier for bands to tour overseas so I think things are going pretty well right now. We just need to keep working and supporting our local scene as much as we can to help it grow up even more. 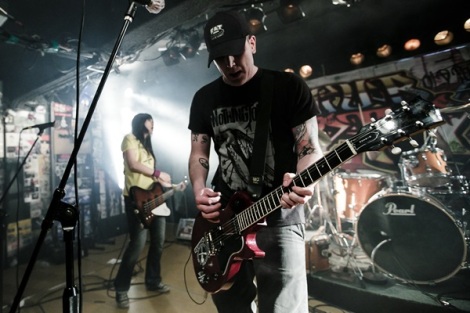 What do you expect from this Singapore and Malaysia tour? What kind of audience that you hope to meet?

Jeff: We first toured Malaysia in 2010. At that point, we had only been a band for about 8 or 9 months. None of us had toured internationally before so it was a huge learning experience. We basically took any show we could get which meant we ended up playing with mostly hardcore and metals bands. That wasn’t really a good fit for us. This time around, we’re looking forward to fitting in with lineups a bit more. Dean (Kids On The Move) has worked really hard to get us in the right places at the right times, and we’re just stoked to be down there and get to play.

On the other hand, what kind of excitement can we expect from WTM’s gig?

Jeff: WTM has come a long way since our first tour. We’re a lot more comfortable on stage and I like to think the songwriting has improved since 2010. There is definitely a lot more energy all around so we’re excited to share that with everyone, especially the people who saw us five years ago.

Please leave a message to your fans.

Trash: We can’t believe it’s taken us 5 years to get back down to play for you guys, but it’s finally time, and we can’t wait to play all over and meet as many local punks and hardcore kids as we can. See you soon!

Whatever That Means’ Singapore and Malaysia tour date:

Sunday 1/25: The Wall with The Nerds (Italy), Batu Pahat, Malaysia