Staying as a band for 25 years is such an amazing feat, moreover doing so with the same members from the start. LUNA SEA is one of the bands that have managed to accomplish the feat, and they are in the middle of months of celebration: celebrating their 25th year together by holding a nationwide tour. After sweeping cities one by one, performing in various venues, LUNA SEA then closed 2014 with two gigantic-scale concerts, one in Saitama Super Arena (December 21) and another in Yokohama Arena (December 23). Relawan Konser attended the latter, and again witnessed the vitality of the band and the unquestionable enthusiasm of the fans.

Even before the concert started, fans had begun clapping their hands, asking for the band to appear. What began probably spontaneously and only by a few fans, grew into a thunderous demand by the whole arena. And they were answered by the dimming of the lights, followed by a beam of light piercing the darkness from the stage to the opposite side of the arena. The beam of light then spread around from the center, exciting people even more. They just exploded in cheers when the members of LUNA SEA – the same members with the ones that climbed to the stage for the first time as Lunacy a quarter of century ago – appeared in front of their eyes. The band launched into the opening number, the epic Anthem of Light from their latest studio album.

Without a break, but to the sound of a loud bang, and to vocalist Ryuichi calling, “Yokohama Arenaaa…!” LUNA SEA continued with a classic hit from their second album Image. If there was anyone who still hadn’t heated up yet, now they just couldn’t stand still, because it’s Déjàvu that the band was playing. Hardcore fans could be seen headbanging and doing oritatami to the song, while members SUGIZO, J, and INORAN ran energetically from one side of the stage to another. 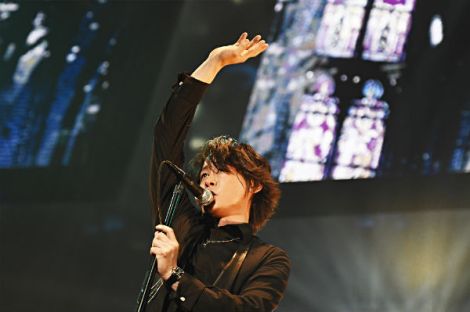 Ryuichi then greeted Yokohama Arena once again, and welcomed fans to this year’s last concert of the 25th anniversary tour. LUNA SEA then jumped forward again in time, to their single that was released in December two years ago. Red lights bathed the stage as the band performed Rouge. SUGIZO’s fans raised their hands with fingers forming the guitarist’s characteristic salute when he was doing his solo. Fans were again thrown into the past, as the band continued with JESUS, a song from their 1993 album, Eden. Ryuichi lamented fiercely, with J (the composer of the song) doing the backing vocals, “Jesus, don’t you love me?”

After that, in succession, LUNA SEA performed four of their latest songs. First it was 乱 (read as ran, meaning disorder or riot, but the band stylized it as Run), with the five screens hanging over the bands showing the animations of elements that symbolized each member: fire for bassist J, water for guitarist INORAN, wind/air for guitarist SUGIZO, earth for drummer Shinya, and the moon for vocalist Ryuichi. At one point, a single giant spotlight shone on Ryuichi, while the other lights went dark; it was a beautiful and grand sight.

Ryuichi then took some time to congratulate Yokohama Arena, which was also celebrating its 25th year in existence. Afterwards, LUNA SEA launched their next song, Lost World with its strong 80’s feel; fans shouted in joy because it’s a live rarity. Despite it sounding like originating from the time around LUNA SEA’s birth, it’s actually the B-side to their 2013’s single, Thoughts. To make it even more precious, Ryuichi played a guitar during the song! And J truly showed off why he’s called one of the best bassists in Japan with his amazing solo; his basslines felt even groovier than on the record. During the song, lights flashed seemingly frantically to all directions, as if looking for something.

Next was MARIA; the solemn air of the song heightened by the predominantly blue lights and a video showing mosaic windows of a church on the overhead screens. The lights changed into red and golden for GLOWING, in which Ryuichi’s brutal screams deliciously mixed with SUGIZO’s guitar cries. The song was closed by Ryuichi vibrating his voice to the sounds of piano keys being struck.

The other members then disappeared from the stage, leaving it to SUGIZO, who stood majestically with his violin, and started moving his bow as one beam of white light from behind Shinya’s drumkit shot through to the opposite side of the hall. Fans held their breath, listening religiously to SUGIZO’s violin solo; INORAN then stepped in with an acoustic guitar, and they began a haunting duet as the single light swept around the arena, changing colours every now and then. Shinya joined the two of them at the end of their jam.

The mysterious atmosphere built by the two guitarists’ duet was continued in Shinya’s impressive drum solo. And fans knew what they had to do when Shinya put his hands behind his ears: they screamed his name repeatedly. This is a familiar part of each LUNA SEA’s concert that has become one of the moments fans always wait for. But not everyone expected the firecrackers at the end of his solo! “Yokohama, you are awesome and cool!” Shinya roared in praise, and other members returned to the stage. INORAN climbed to the center platform, and this was enough clue for fans to what the next song was: just as expected, the intro to another long-time favourite, TONIGHT, blasted from INORAN’s guitar. Arms were again raised in the air!

After their seventeenth single, Thoughts, it’s time for J’s solo bass. Heavy, loud, and fiery, the sounds J produced with his bass shook the eardrums of the audience. The bassist himself riled up the audience, keeping them shouting with a zeal. He then counted, “One, two, three, four!” and Shinya, INORAN, and SUGIZO joined him, causing more noise to soar from the audience seats.

The concert now entered the last segment of the main set. Lights danced wildly behind Shinya and bursts of smoke blurred sights for a while during The End of the Dream. A song off their self-titled debut album, TIME IS DEAD, triggered fans to again do violent oritatami and headbang – reminiscent of the old days when LUNA SEA used to play livehouses like Meguro Rockmaykan as a young band. INORAN and SUGIZO walked far to the extension stages, while Ryuichi went behind Shinya’s drumkit, greeting fans who sat behind the stage. Yes, fans’ enthusiasm was so overwhelming that even those seats were made available.

A good concert should be able to offer enough novelty to keep fans from feeling bored, as well as enough familiarity to keep fans waiting. LUNA SEA knows all the tricks; for ROSIER, of course fans, as always, anticipated the time when J finished his semi-rap monologue then threw his mic stand over his shoulder. They were not to be disappointed.

The main set was closed with absorb, with INORAN’s backing vocals and J’s heavy and steady basslines. SUGIZO spun around during the song, not showing any signs of tiredness. Near the end of the song, the lights in the Arena were turned on on the audience. Everyone waved their hands to the music, as the song rolled to its conclusion, and LUNA SEA members withdrew out of sight.

And as the tradition for LUNA SEA’s concerts held around Christmas time, fans broke into a massive choir singing Silent Night while waiting for encore. The band members returned with Santa hats on, and a signed banner was retrieved from fans to be displayed on the stage. Ryuichi jokingly said that December 23rd is Black Christmas for LUNA SEA and their fans, and told the audience that they had a Christmas present: a cover of John Lennon’s Happy X’mas (War Is Over), followed by their own BREATHE. The close ties the band has with their fans were symbolized by one moment when INORAN approached the fans on the second floor on the kamite side of the stage; one woman just broke into a tearful cry seeing him so up and close, and he patted the fan’s head with brotherly love.

Before continuing to Metamorphosis, Ryuichi introduced the band members one by one, asking them to speak some words to convey their feelings to the audience. Instead of talking directly into the microphone, INORAN chose to approach Ryuichi and whispered his words to him, making the vocalist giggle.

Firecrackers went off outloud to mark the beginning of PRECIOUS…, and fans jumped as they sang, “ima wa koe wo karashi tsuzuke!” Together with Ryuichi, the whole Arena sang the familiar lines of the track off LUNA SEA’s debut album. Then it’s time for another tradition in LUNA SEA’s concerts: the rain of streamers at the start of WISH. Today, the streamers came in beautiful colours of red, golden, and green. As always, the song ended the concert brilliantly, with the massive lalalala choir. But it’s not really over yet; fans kept on shouting and calling the band, so LUNA SEA gave another present for fans: with Grace, the concert really pulled to an end. The five members then stood side by side, holding hands, asking fans to do the same – then everyone jumped high together, beaming happily! The band members thanked and bowed at the audience, and even INORAN eventually, emotionally, spoke to fans through the microphone. And even after the other members had left the stage, SUGIZO stayed, bowing deeply for a very, very long time.

The concert might have ended, but the tour would continue until March 2015. LUNA SEA also revealed that the tour final had been decided: it will be held in Osaka-jou Hall on March the 14th next year. On to the twenty sixth year – and the dream continues!