LUNA SEA’s guitarist INORAN who also has a lively career as a solo artist, celebrated his 44th birthday this year with a string of performances titled B-DAY BASH!!! in Osaka, Nagoya, and Tokyo. The live in Tokyo was held in Shibuya Public Hall, one day before his birthday (September 29 – which he would celebrate with his fan club members in Akasaka BLITZ).

That day, 15 minutes before 6 pm, the hall turned dark and only blue lights illuminated the stage as the intro track was heard. The stage was arranged in a simple manner, only with four mats on it and a white ‘INRN’ on black as the backdrop. The blue lights then gave way to small, yellow lights arranged in strings wrapped around the amplifiers and drumset. INORAN’s band members – guitarist Murata (originally from my way my love) and bassist u:zo (from Sonz of Freedom)and drummer Ryo Yamagata – entered, followed by the man himself. They were all dressed in dark clothes, but only INORAN completed his look with a jacket. Eccentric u:zo was barefoot.

For the fans – the NO NAME?s – who welcomed them with handclaps, they quickly launched into the opening track, No Name. Although it’s only the first song, INORAN already moved closer to the edge of the stage, first the center, then the right, lastly to the left, greeting his fans. The song was followed by Hide and Seek, which prompted the audience to clap their hands again. INORAN, u:zo, and Murata had their instruments changed for the next song, A Day Goes On By. u:zo was now already truly on fire; he climbed up one of the salons and jumped high from there at the beginning of the song.

They then took a short break while INORAN greeted Tokyo, the audience of the third of his B-DAY BASH!!! lives. He was glad to see not only the beautiful female fans but also some men among the audience. Well, men and women, they all fist-pumped during the fiery SuperTramp: “Why don’t you leave us? Why don’t you speak out?”.  INORAN and Murata played their guitars face to face during this song.

Afterwards, u:zo’s bass and Ryo’s drums built up a harmony, as the curtains covering a screen behind Ryo were drawn aside, and a video was played on the screen: whitish grey smoke, floating up in the air. It’s time for smoke and its heavy bass riff, challenging people not to stay still. The quartet continued with Selfless, at the beginning of which INORAN, Murata, and u:zo stood in positions so everyone faced the central point of an imaginary square in front of Ryo’s drumset. Finally INORAN turned his body to the microphone and began singing again. He did the solo for this song, and all lights were on him during his solo.

Then, before no options, as the roadies were again bringing different guitars to the stage, and as fans screamed INORAN’s name, a man on the second floor – one of the guests – started singing, “Happy birthday to you…” INORAN replied, “Thank you! But… now?” Fans laughed. INORAN went on explaining that tonight was his birthday eve, his real birthday would be the day after and he hoped his fans would again come for the birthday live. Still he looked as happy as if it’s really his birthday; we could see him danced a bit in the dark during Candy when the spotlights were not on him.

Again the giant screen was revealed and it showed a video of feathers falling from the sky during Joshua~Sakura. The feathers turned into small orbs of light raining down from above, and some fans lit up and swayed their matches above their heads, adding up to the atmosphere. INORAN then changed into an acoustic guitar for HOME, as the screen now showed a black and white road movie of a journey that seemed to be taken in the US. 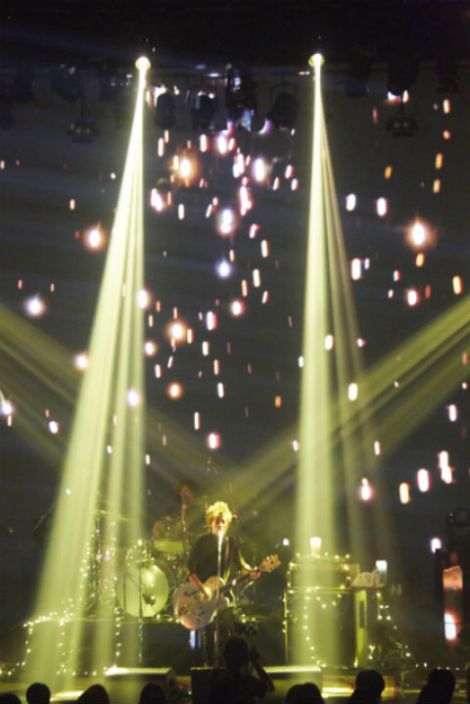 Right after the song, INORAN disappeared backstage, and let his three comrades take control of the stage. The three of them showed off what they could do in a trio format, with Murata using a bow to produce sounds using his guitar. He and u:zo took turn riling up the audience, asking them to scream and shout. “Come on, Tokyooo!” The responsive crowd followed their lead accordingly.

INORAN stepped back to the stage to again greet his fans, but u:zo slipped to the backstage. He returned, with what seemed to be a towel wrapped around his head, carrying a birthday cake with a pic of INORAN’s face on it. u:zo tried hard to keep the candles alight until he got close enough to INORAN, who then blew the candles right away. Anyone hoping for some cake on the face was in for disappointment, though, as INORAN only took some cream with his fingers and tasted it before u:zo brought the cake back to the backstage. He then returned with a minicompo, dressed up like a hippie. He tried to turn the compo on, but he failed, so he just chanted a bit. This made INORAN and other people laugh. Again u:zo disappeared, and returned as his usual cool self, pretending that he knew nothing about the previous hippie.

Then INORAN and his band appeared to be a bit confused. Changing instruments, starting a song but stopping even before they reached the refrain. What’s going on? Ah, INORAN just decided that it’s time for them to perform some songs from his band members’ other projects. First they performed my way my love’s BRAQUE, with Murata singing. INORAN seemed to really enjoy his time just playing the guitar without singing; he jumped around freely. The next song was Sonz of Freedom’s African Hardcore Samba; this time u:zo took the helm, singing, while INORAN concentrated with his guitar and riling up the audience to jump too.

They still had some songs up their sleeves. After One Big Blue, they continued with Nasty, in which fans again handclapped and jumped high. INORAN himself lead them to handclap. The screen was again revealed for REDISCOVER ONE ANOTHER, this time showing a black and white video of the lyrics. “Everyone’s gotta face their broken dreams. Some only see the downside, some go blaming the whole world. No one’s safe in this life, hearts are gonna break,” INORAN sang, sounding pessimistic at first, before shouting, “DON’T LOOK BACK! DON’T LOOK BACK!” and sweetly comforting, “Cross my heart, in this life you are not alone.”

Two songs closed the night. Grace and glory was followed by the much-loved song, Get Laid. In this last song, all lights in the hall were on so INORAN could see everyone. He asked where the men were, and he asked them to shout “Get laid!” and “Oh yeah!” on his cue. Done with the men, he asked the ladies to do the same, before the two sexes joined together to shout the same words during the song. The live ended gloriously, and INORAN asked all audience to move closer together to the center to have his pic taken with his band members and his fans as the background. INORAN and his three friends left the stage, again thanking everyone who’d come. For minutes after that, fans who were still not satisfied kept on clapping and calling for him, asking for an encore. Unfortunately it was really the end, and staff had to use megaphones to ask the audience to leave the hall.

INORAN would soon be busy again, touring some Asian countries (see list below) and continuing his nation-wide tour with LUNA SEA. Another busy year ahead for the 44-year old… but for now, let’s all wish him a wonderful happy birthday and many happy returns!