Here’s what happens to you when you get a chairshot: somebody comes up to you with a chair and hits you with it. That’s more or less how you will feel like when this Korean band, Asian Chairshot, hits you with their music. Mixing alt-rock, garage rock, and psychedelia, the trio released a digital EP, called Chairshot, in less than 4 months after the birth of the band. They quickly caught the attention of music critics and fans of the Korean indie music scene alike. So far, under their belt they can boast performances in Korean music festivals like Jarasum International Jazz Festival and the prestigious Ansan Valley Rock festival, and also in overseas festivals like Mosaic Music Festival and Baybeats Festival, both in Singapore. Now they are heading to the United Kingdom for a tour in May 2014, starting with music and arts festival Liverpool Sound City, then on to several other cities including London! The band consists of Youngwon Hwang (bass and vocals), Heenam Son (guitar), and Kyewan Park (drums). Youngwon and Kyewan answered our questions about many things – from the origin of the name of the band to their gigging experiences. 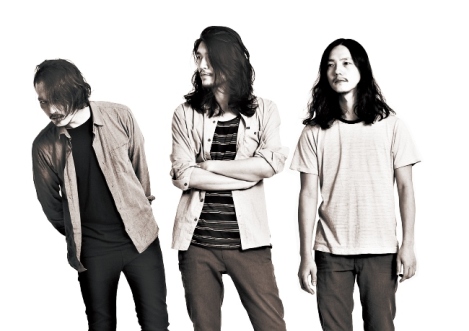 What made you name your band with the name of a (now) illegal move in wrestling? Are you fans of wrestling?

Youngwon: I’m a big fan of wrestling.  When I was younger, wrestling was very popular in Korea.  The Ultimate Warrior was my favorite wrestler.  It’s sad that he recently passed away.

Kyewan: When we chose our name, we were looking for something that went well with the word “Asian.”  We thought that “Chairshot” sounded good with it.  I think names are best when they are chosen easily and quickly.

Despite being a rock band, you once played at the Jarasum International Jazz Festival. What was it like playing as a rock band at a jazz festival?

Youngwon: We were still a really new band when we performed at that festival, so we didn’t play on a big stage.  We played five times over the course of three days including a busking-style performance.

Kyewan: The audiences for our shows at the festival were mostly families and couples.  Because it was a jazz festival, it was a different audience then we were used to performing for.  We tried to go crazy during our sets and everyone liked it.  It was a good experience for us.

Last year you did a collaboration gig with Smacksoft. It must have been awesome! Who came up with the idea to collaborate together?

Kyewan: Smacksoft’s manager and our manager came up with the idea together.  The show was really cool.  We held it in an underground parking lot and had images playing on the walls during the concert.  Along with collaborating at the gig, we also released a limited edition CDR with Smacksoft.  It featured two songs.  The songs were written by Smacksoft’s front woman Bo Ryung Whang and featured Asian Chairshot and Smacksoft playing together.  Collaborating together was great and allowed us to become good friends with Smacksoft.

With three heads in the band, there must be musical influences that you share and those that you don’t. How does your songwriting process go with the different ideas and influences each of you may have? And if there are differences that are hard to settle, how do you try to settle them – not by performing chair shots on each other, we hope?

Kyewan: We’ve never tried it, but maybe chair shots would be the quickest way to settle differences!  Actually, we’re all usually very considerate of one another and are very good about discussing our different opinions.  We mainly make songs by jamming together.  When we find an idea for a song, we listen carefully to what each person is playing and trust one another to come up with cool ways to help further develop what is being made.

We think the closest place you’ve ever played to Indonesia was Singapore. Not only once, but twice. How was the South East Asian audience? Do you want to play in other parts of South East Asia one day?

Youngwon: We’ve played in Singapore twice.  We played at the Baybeats festival in 2013 and this past March we performed at the Mosaic Music Festival.  We actually have a plan to play in Singapore again at the end of May.  Full information about that visit will be announced soon.   We’d love the chance to play throughout South East Asia if we can.  I loved the beer in Singapore.  I’d like to try the beer in other parts of South East Asia too!

Kyewan: I really love South East Asia.  And as Youngwon said, we hope we can play all over South East Asia one day.  The audiences we played for in Singapore were excellent and reacted really well to our music.  The people were kind and friendly too.  Everything was good, good, good!

And you’re going to the UK! Any special preparations for your upcoming tour there?

Youngwon: Yes, we’re playing at the Liverpool Sound City music festival in early May and then will play several other concerts in England.  We’re really excited for the tour!  I am trying to study English now.  And we’ve been practicing a lot to prepare for our concerts.

Kyewan: I’ve heard that cigarettes are expensive in the UK.  So I’m personally going to prepare for the tour by stocking up on cigarettes in Korea!

Thank you for the interview! Any message for your fans out there, especially those waiting in the UK?

Youngwon: Thank you very much for taking the time to read about our band.  We hope we can see some of you soon in the UK, Singapore, or another part of the world.

Kyewan: If you live in the UK or Singapore, please come see us play in May!  And we’re going to release our first full-length album on May 28 too.  It’s called Horizon.  We recorded Horizon in December in Seoul.  It was produced by the guitarist from Smashing Pumpkins, Jeff Schroeder.  And the engineer was Ryan Grostefon.  He worked with Smashing Pumpkins on their acclaimed 2012 album, Oceania.  We’re really excited for people to hear our new music, so please check it out!

Thank you once again, Asian Chairshot, and good luck with your UK tour! Now if you live in the UK or will be there during the first half of May, why don’t you check this explosive band out? Here is a full schedule of Asian Chairshout May 2014 UK tour: