After last December Park Jungmin in his Christmas events had fun with his fans in Japan – members of his ‘Kazok’ or ‘family’ – he returned to celebrate Valentine’s Day with them. Right on February 14th, 2014, Jungmin held two concerts, one during the day and one in the evening.  Attendees were also promised a different prize for each show time, which surely made them curious.  That day, the second severe snowstorm of this winter stroke Tokyo area; still, it didn’t stop Jungmin’s fans from flocking in front of Shinjuku BLAZE, the venue for the concerts.

The venue was an all-standing one, and located underground, like most live houses in Tokyo. In the front hall, with its striking black and red checkered floor, flower stands were lined along the walls and on tables. These flower stands came from fans all over the world, not only from East Asian countries but also countries as far away as in the Middle East and Central and South America. This was an indication of Jungmin’s popularity in many different parts of the world!

As usual, Jungmin performed with a live band. When the musicians entered the stage, it’s a sign that the concert was going to start soon. In the center of the stage, there’s a small movable podium made like a radio DJ desk, with a microphone and an ON AIR lamp. Jungmin appeared on stage, wearing casual clothes and a snapback, heading to the podium.  He then pretended to be DJ-ing for Young Street; the whole concert was designed as if it is a radio program, with Jungmin as the DJ, the performer, and even the CM star, as we will see later.

Jungmin opened his performance with Valentine Day Kiss which he performed sweetly, followed by what was probably one of his trademark songs, Kiss. Fans already screamed from the first song. After the two songs, Jungmin shifted the spotlight to his band members. He approached them one by one, starting from the keyboardist who was positioned on the far left. “He’s this band’s visual,” Jungmin explained, laughing. His band members tried to introduce themselves in broken Japanese, looking at notes when they did. Jungmin helped them where they stumbled, and added some jokes on his own. He explained that the bassist had already had a girlfriend (“For seven years,” the bassist added) and that he had a couple ring with his lover. When the drummer, who called Jungmin his friend, revealed that he also had a lover and a couple ring, Jungmin grinned while looking at the bassist and the drummer alternatingly. “Oh, could it be that both of them…” This made the audience laugh.

The band’s line up was completed by a guitarist and two backing vocalists (one of them was again Jungmin’s former vocal coach). If during his Christmas concerts he had been accompanied by four dancers, today he only brought two dancers along. It might not seem extravagant. But what was so great about the Valentine’s Day event was that it was so intimate and relaxed. Most fans must have known Jungmin since his days as a superstar with his now-inactive group, SS501, but now as Park Jungmin, and in a small-ish venue like BLAZE, he felt so close to the audience. “Because we are family,” like he said later, when he claimed that he cared about everyone in the audience. When there were mistakes, he would just laugh. When there were some noises from the backstage, Jungmin stopped his reading and turned his head to the source of the sounds.

Fans were free to interact with him inbetween songs (by shouting, of course, so that they could be heard); he would listen and converse with them. This made the concert flow in a natural fashion. Even when some fans complained “Jungmin, mienai (I can’t see)” when pictures from his European tour were showed on the screen on the stage, Jungmin himself checked was wrong. Realising that his DJ table was blocking some fans’ view, he began pushing it himself to the side of the stage! A staff quickly came and helped him, but seeing Jungmin would do that for his fans truly showed how humble he was.

Fans were also entertained by Jungmin’s fake commercials. Just like in a true radio program, there were CMs too. But the CMs were all promoting Jungmin’s goods, of course. And starred by Jungmin himself – to be exact, one of the CMs was starred by ROMEO, Jungmin’s other persona. Pictures of ROMEO and Jungmin appeared alternatingly on the screen, with ROMEO commenting, “ROMEO desu. ROMEO janai. ROMEO desu…” (This is ROMEO. This is not ROMEO. This is ROMEO…) Surprisingly, there were a picture each of Kyujong and Hyungjun! ROMEO kept his voice flat: (when Kyujong’s pic appeared) “This is…” (when Hyungjun’s pic appeared) “…a pervert.”

Jungmin also read some love stories or problems sent in by fans. When the sender was present in the audience, he would talk to them directly about their messages. He would give advice and share his own stories too. Some of the messages were quite long, and they were all written in Japanese. Fans cheered him, “Ganbatte!” but Jungmin managed to read the messages quite well. (He didn’t need a translator either for the whole concert.) Sometimes he read kanji characters wrongly, and when fans shouted to correct him, he would look at them, pretending to be annoyed and clicking his tongue. One message, though, contained an error: it said娘があります (musume ga arimasu, I have a daughter – it should be musume ga imasu, because arimasu is used for non-living things). Jungmin read as if the mistake was not there: he read it the correct way, musume ga imasu. Fans knew he spoke Japanese quite well, but his ability to detect and correct that mistake still awed them.

It was then announced that Jungmin would release a photobook and a DVD from his recent European tour. As a teaser, audience were shown some pictures from his trip to Europe. When the slideshow reached a picture of ROMEO, Jungmin in a relaxed way said “That is a picture of my friend.” (Keeping his other persona apart from his real self, Jungmin would answer “He won’t be here today” and “He is in Europe” when people asked him about ROMEO’s whereabouts.)

For the encore of the daytime performance, Jungmin sang Beautiful and Wara wara.  Then the audience got a surprise – Jungmin would hand a present to everyone personally, and he would also shake everyone’s hands! Maybe more than the postcard that Jungmin then handed one by one, the handshake session was a greater present! Time allowed for each attendee was very short, though – staff quickly pushed fans away from Jungmin if they were thought to spend too much time with him – but everyone was undoubtedly happy.

The night-time performance started at 18.30 JST.  It followed a similar pattern of rundown with the daytime performance, but with a slightly different setlist. For instance, if during daytime performance Jungmin sang Confession and Bye Bye, in night-time performance he sang Everything (that he said he hadn’t sung for a long time) and Lucky Days. Other songs are the same though, like Missing You, Kimi-iro, 1 2 3 Koi ga hajimaru, and also the soundtrack for Empress Ki that he worked on with SS501’s maknae, Kim Hyungjun. Some other songs he performed was Futari, Asai yume no hate.

Different messages from fans and live interaction with fans also made the night-time performance feel different. The night-time performance was closed with an encore that consisted of Not Alone and Wara wara. Unfortunately, although to attendees of the night-time performance Jungmin would still hand the present personally, they now might not shake his hand. “You only have one second each,” warned the MC. Of course the fans were surprised and gave comments like “One second! So fast!” But it was still a nice chance to be face to face with Jungmin, and a Valentine’s day worth spending with him! 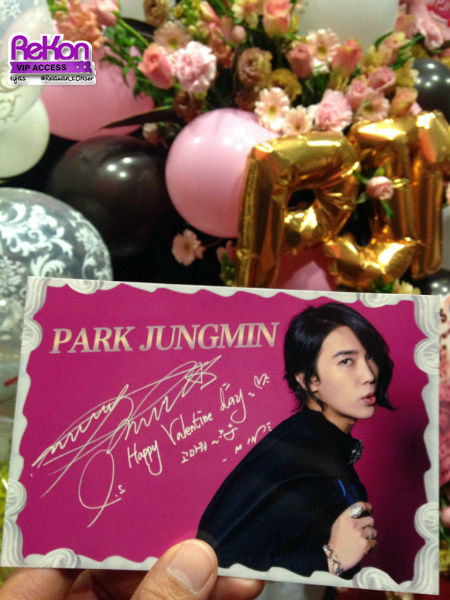